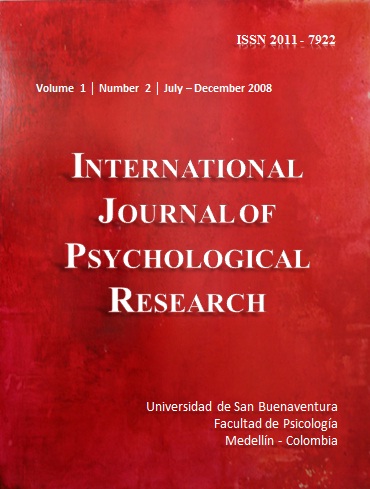 The self-efficacy construct has been studied from two different viewpoints. Firstly, in a specific manner, as it was originally proposed and secondly, in a generalized way, defined as an optimistic self-belief of personal capability to cope efficiently and competently with a variety of situations. In order to measure this construct at the broadest level the General Self Efficacy Scale (GSE) was designed and adapted to Spanish in Costa Rica. This study aimed at validating the scale in a Colombian sample composed of college students. Participants were also administered the Situational Personality Questionnaire (named in Spanish as Cuestionario de Personalidad Situacional, CPS) and its factors have, theoretically speaking, a certain relationship with the studied construct. According to the results, the GSE showed a high internal consistency (Cronbachs alpha value of .83). Convergent and discriminant validity of this instrument were evaluated through the CPS and positive correlations were obtained with efficacy, confidence, self-concept and emotional stability while negative correlations were obtained with anxiety. Through exploratory and confirmatory factor analysis, the unidimensional structure of the scale was validated.
https://doi.org/10.21500/20112084.907
PDF

The work that is sent to this journal must be original, not published or sent to be published elsewhere; and if it is accepted for publication, authors will agree to transfer copyright to International Journal of Psychological Research.

To give up copyright, the authors allow that, International Journal of Psychological Research, distribute the work more broadly, check for the reuse by others and take care of the necessary procedures for the registration and administration of copyright; at the same time, our editorial board represents the interests of the author and allows authors to re-use his work in various forms. In response to the above, authors transfer copyright to the journal, International Journal of Psychological Research. This transfer does not imply other rights which are not those of authorship (for example those that concern about patents). Likewise, preserves the authors rights to use the work integral or partially in lectures, books and courses, as well as make copies for educational purposes. Finally, the authors may use freely the tables and figures in its future work, wherever make explicit reference to the previous publication in International Journal of Psychological Research. The assignment of copyright includes both virtual rights and forms of the article to allow the editorial to disseminate the work in the manner which it deems appropriate.

The editorial board reserves the right of amendments deemed necessary in the application of the rules of publication.

Most read articles by the same author(s)